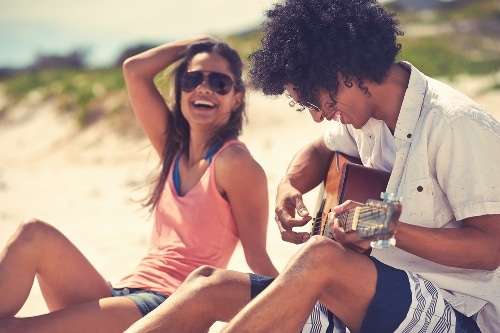 Is your international love life being held back by a lack of Spanish vocabulary?

Have you got your eye on someone special but get tongue-tied—like you just attempted a Spanish tongue twister—whenever you see them?

While the language of love speaks volumes, sometimes you need to actually know how to talk about love, in another language, for your relationship to progress.

Wouldn’t things be easier if you just understood each other without having to make any effort? Well, yes, but here’s why you should persist…

The Benefits of a Cross-cultural Relationship

Going out with someone who speaks another language has many positives. You get to learn all about another culture, for one thing.

Secondly, everyone knows there’s no better way to learn Spanish than by having a relationship with someone who speaks español without even thinking about it.

Lastly, if it all works out, you get to make beautiful bilingual babies. But let’s not get ahead of ourselves…

Flirt in Spanish: Key Phrases for Navigating Every Stage of Your Relationship in Español

Pick Someone Up in Spanish

First things first, you need to nab the person you’re interested in. You need to get their attention, break the ice and get the conversation started.

So, you’ll need to know how to coquetear (flirt).

If you’re not a natural flirt, then blaming this on imperfect language skills can actually work to your advantage. Plus, with your cute, foreign accent you really can’t fail.

Let’s imagine situation number one, the classic encounter in a bar. You see that handsome person sipping a drink and you want to approach them. But what should you say?

You could try: ¿Qué estás tomando? (What are you drinking?).

The smoothest, dream answer is lo mismo que tú (the same as you), and the more likely answer is something like cerveza (beer) or vodka con cola (vodka and coke). In the worst case scenario, the object of your desire simply ignores you, or says “no es asunto tuyo” (it’s none of your business).

Whatever happens, the next thing to do is order a drink (hopefully for both of you) and, unless you got “no es asunto tuyo” (in which case, move to another part of the bar and try again), move on to the next step.

In scenario number two, the person of your dreams catches your eye on a bus or train, and you want to talk to them but don’t know how. In this case, you should probably start with a classic line about the weather. “¡Qué calor/frío/lluvia!” (It’s so hot/cold/rainy!) is not terribly exciting, but will do nicely. Then you can ask them “¿A dónde vas?” (Where are you going?) and hope they don’t say “lejos de ti” (far away from you).

Hopefully, this will instead begin the conversation with the future love of your life, and you’ll later think about how you read this post and didn’t believe you could really meet your future spouse on a bus but it happened nonetheless! What a great story to tell the grandkids.

Another sneaky way to get someone talking in either situation is go for the “Do I know you?” approach: Say “¿Te conozco de antes?” If you want to go really cheesy, and if they say “no,” you can reply with “Debo haber soñado contigo entonces” (I must have been dreaming of you).

Once you’ve got the object of your affection talking, you’ll want to keep the conversation going by asking them all about themselves and winning them over with your wit and charm.

Again, if you don’t have natural wit nor charm, you can blame this on the language barrier. “¡Soy muy chistoso/chistosa en inglés!” (I’m really funny in English!) might work, but make sure you have an English joke up your sleeve to prove the point, even if your partner can’t understand it (on second thought, perhaps it’s better if the joke is so complicated they’ll never get it).

Possible phrases to get things moving include:

If all else fails, showering your potential partner with compliments can also up your chances of a date. How to say “you’re beautiful/handsome” largely depends on where your Spanish speaker is from. The Spanish like to say “eres guapa/guapo,” the Argentinians go for sos hermosa/hermoso and a more neutral way is eres linda/lindo.

So now that you’re going out, how do you talk about this relationship with your new partner? Well, that depends exactly how you describe the relationship. You might say: estamos saliendo (we’re going out), or even somos amantes (we’re lovers).

A potentially confusing phrase that’s used a lot is estar de novio, which means you have a boyfriend/girlfriend.

If you’re in an ambiguous relationship, you can also say “somos amigovios” (we’re friends with benefits, or kinda friends but kinda dating).

But what about if you get that itch to be soltera/soltero (single) again?

Even if you’ve done all of the above, potential problems can soon arise. Maybe you went out for a while, but now things just aren’t working, or maybe you’ve realized you’re just too different and would rather just be friends.

Here’s what to do in the following scenarios.

Problem 1: Things are going too fast

You feel like the relationship is racing along at breakneck speed. You’ve already met the whole family, there’s talk of taking a trip together and it’s just all too much.

When they say to you: “Estaba pensando en ir a la playa por un par de días…¿a dónde vamos?“ (I was thinking about going to the beach for a few days, where shall we go?)

Problem 2: The spark just isn’t there

They can’t get enough of you, but you’re just not feeling it.

When they say “Me encanta estar contigo” (I love being with you), you could say, “Yo también, pero solo como amigos” (Me too, but just as friends), and then run in the opposite direction (just kidding…kind of).

Problem 3: Your partner is a terrible dancer

Okay, so this one is maybe not such a big deal. But it can be really embarrassing when you’re at a family wedding and your partner is dancing so wildly a space has cleared around them. Plus, most of your family thought that speaking Spanish goes hand in hand with shaking your hips around so they can’t understand what’s happening (let’s be honest, you thought the same).

When they say “¿Por qué todos me están mirando?” (Why is everyone looking at me?)

You could say: “Están celosos” (They’re jealous), and then distract your partner with one of the above compliments/come ons.

If you really can’t deal with it, you could always try using problems 1 and 2 as an excuse. Other break up cliches that may come in handy include no eres tú, soy yo (it’s not you, it’s me) and necesitamos tomar un descanso (we need to take a break).

Now that you have all the info you need, the next step is to go to as many bars and get on as many trains or buses as possible. Oh, and do so in a place where there are likely to be Spanish speakers…

Horse Around with These 10 Wild Animal Expressions in Spanish