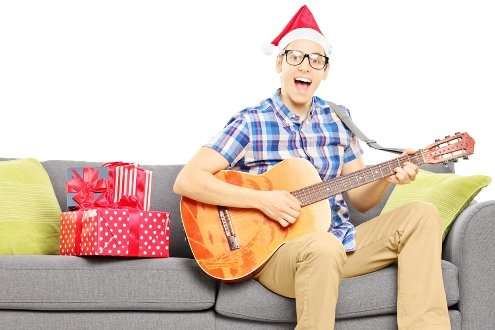 The tree is up.Gifts are wrapped.

It’s also that time of the year when we avoid our textbooks and dodge anything that looks like work.

But there’s a way to enjoy the festivities and still develop your Spanish skills.

There’s a solution to maintaining your Spanish development, and best of all, it’s a fun one!

Listening to Spanish Christmas carols, or villancicos as they’re called in Spanish-speaking countries, will have you rockin’ around the Christmas tree in no time.

Why Christmas Carols Will Improve Your Spanish Listening Skills

While Christmas carols make for lovely background music to set the mood over the holidays, you can take it several steps further by using these strategies to learn Spanish from these carols.

Said to have originated by African slaves in Colombia during the Spanish colonization of the country, Cumbia is a vastly popular musical style enjoyed across Latin America. Listening to “Cumbia de Navidad” will teach you about the deep-rooted cultural history of the continent, as the small dance steps started because the feet of the slaves were shackled so they couldn’t move or do intricate dance steps.

This famous and widely sang Spanish version of “Jingle Bells” is great for singing along and comparing lyrics. From the opening line “Ha llegado Navidad” (Christmas has come), you’ll notice it’s different from the English version’s “Jingle bells, Jingle bells, Jingle all the way,” thereby allowing you to compare and contrast the lyrics for a valuable lesson about translation.

Finding it difficult to roll the infamous Spanish r? “El Tamborilero” is not only fun to sing along with, but the Spanish version of “The Little Drummer Boy” will also help you to focus and develop your trilled, rolled r‘s in an entertaining way when you reach the “Rum-pa-pum-pum” lyrics. Pop this track on, lose your inhibitions and you’ll soon be confident enough to roll your r‘s naturally in everyday conversation.

Also known as “El Burrito de Belén” (The donkey of Bethlehem), this Venezuelan Christmas song is sang in classrooms across Latin America, and was even covered by the famous Spanish singer Juanes. For added Spanish learning, why not write out the Christmas nativity story, as the lyrics of this song tell the tale of a donkey who is journeying to Bethlehem on the night Jesus was born.

This popular party song sings a different kind of salsa. Unlike the usual sensual, provocative salsa lyrics, “La Fiesta de Pilito Navidad” encourages the indulgence of Christmas festivities such as eating cake, pork, rice and rum. Played at parties across Latin America, families and friends take to the dance floor as a group rather than couples.

This song will have you salsa dancing across your kitchen when cooking Christmas dinner, or around the tree when decorating. Its fun rhythms are impossible to deny, as the lyrics encourage listeners to forget their problems during the holidays and just enjoy being with their family.

Similar to “Cascabel”/”Jingle Bells,” “Paseo en Trineo” is a great song for Spanish to English lyric translations and comparisons. Starting with the first line, “Ponte la gorra, guantes y abrigo…ya va a nevar” (Put on your hat, gloves and coat…it’s going to snow) is clearly different from the English version’s opening line, “Just hear those sleigh bells jingling, ring, ting, tingling too.” This fun, joyful song is always a winner for getting into the Christmas spirit.

Considered one of the best Latin American singers in the world, Puerto Rican Luis Miguel will have you swooning and waltzing around your living room with his Spanish version of “White Christmas.” This is a great song for relaxing, while listening to the velvet voice of Luis. For added Spanish learning, try to count the number of times he uses a word to describe snow, write it down, then add your own descriptive words to the list.

Unlike “La Fiesta de Pilito Navidad,” Marc Anthony’s salsa song “Me voy a regalar” carries the pining, romantic lyrics of a relationship’s breakup, and the promise to find true love this Christmas rather than excitedly partying the season away.

This is a great song for translating to English, as it includes many verbs useful to Spanish learners. To make the most of this song, use one of your listens to write down each verb. Then, see if you can write the past, present and future tenses of every verb on your list!

This Christmas, may your home be filled with the festive notes of Spanish Christmas carols, aromas of delicious feasts and merriment of the holiday season. ¡Feliz Navidad!

If you liked this post, something tells me that you’ll love Perfect Sunset School,the best way to learn Spanish with real local people!