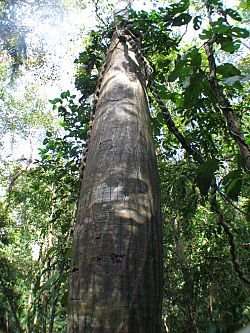 Up to the 1960’s the lands that now constitute the Cabo Blanco Nature Reserve were being depleted of their natural forests for use as farm and pasture land. The emphasis in those days was to develop and increase agricultural production and little concern was given to conservation of natural habitats.
Olof Wessberg (known as Nicolas) and Karen Mogensen arrived in Costa Rica in the 1960’s in the pursuit of Karen’s dream of finding happiness in harmony with nature. They chose to establish themselves in the Nicoya Peninsula.

Soon after establishing themselves in a farm near the Montezuma area, they set up on an expedition to the Cabo Blanco area in seach for native tree seeds to reforest their newly acquired farm. Upon arriving to the area, he was amazed at the abundant wildlife and the size of the trees in the area. This was like an oasis in the midst of a desert as all lands around had been devastated to give way to low-yield pasture and agricultural lands.

This experience was what triggered their determination to save and perserve this “natural jewel”. With the aid of an international agency, they bought 1250 hectares of land in 1963 and turned these lands into the first protected area in all of Costa Rica.

Nicolas died in 1975 and Karen in 1994. Their bodies are buried at the Nicolas Wessberg Natural Reserve which was the original farm they bought when first arrived in the Montezuma area.

Thanks Karen and Nicolas for this great legacy you left Costa Rica and the whole world!

Cabo Blanco is sutuated just a few miles from Playa Hermosa. From Perfect Sunset School you can rent an Atv and get the park in 30min. Its a grat tour full of nature!!!