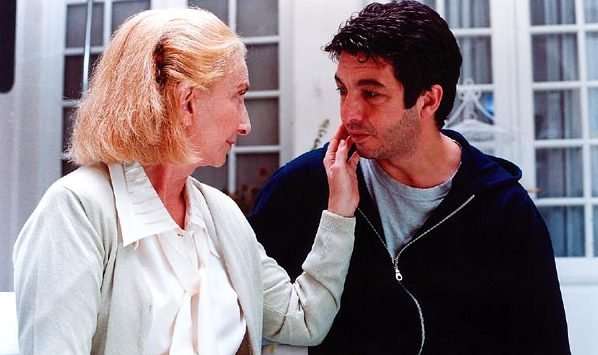 Learning only from textbooks.

But they don’t do a great job of communicating the nuances of the Spanish language and culture.

After all, slang, dialects, emotion and humor – that’s where the real “soul” of Spanish resides.

One great way to cross that bridge is by learning Spanish with music.

Another great way is to learn Spanish with movies.

Movies give you context via body language, expressions and interesting settings. They also have a plot to follow, enrich your study experience and provide you with motivation to learn outside of just “learning for the sake of learning”. In other words, movies are the perfect form of edutainment, and there’s a whole world of them out there waiting for you already!

How exactly do you know which movies to watch though?

Here are our suggestions for the seven best movies for learning real Spanish.

The film “Three Steps Above Heaven” (or literally, “Three Meters Above Heaven”) follows the story of Hugo “H” Olivera as he races through the streets of Spain, wreaking havoc and breaking hearts. Charged with assault right at the film’s outset, H leads the quintessential teenage rebel’s life of motorcycles, breaking the law, and chasing girls – eventually finding himself caught up in a romance that will change his life forever. “Three Steps Above Heaven” is fun and fast-paced, but predictable and Spanish learners will be able to follow the plot with ease.

The film “Como agua para chocolate”, or “Like Water for Chocolate”, is a story about family, tradition, love, life and death. The main character, Tita, finds herself unable to marry the man she loves because of a long-held family tradition and is forever resigned to a life of longing when her sister marries him in her place. Spanning more than 20 years, the film follows the characters throughout their lives and you’d be hard pressed not to find yourself touched by their stories. “Como agua para chocolate” is not only a popular film for its own sake, but contains tons of high-frequency natural Spanish that make it great for language learning as well.

“The Motorcycle Diaries” is the story of Ernesto “Che” Guevara, who worked in a leper colony while motorcycling around South America and eventually led a revolution that dramatically changed South America forever. His experience on the road and the subsequent exposure to the incredible poverty of the local indigenous tribes, inspires Guevara to think big and try to make a positive difference in the world. While it can be slightly difficult at times, “The Motorcycle Diaries” is a fantastic watch for Spanish learners of all levels because it contains examples of slang and dialects from all around South America, which are essential for any well-rounded Spanish speaker.

“Pan’s Labyrinth” is the fantastical story of a young princess who finds herself living the life of a young human girl named Ofelia in war-torn 1944 Spain. Part war story, part fairy tale, this strange but touching film will certainly draw you in and is more than worth a watch. With all its fantasy, “Pan’s Labyrinth” can be hard to follow from time to time, so turn those Spanish subtitles on! That being said, it’s chock-full of great vocabulary about war, revolution, rebellion, and of course – fantasy.

“The Sea Inside” is the true story of Ramón Sampedro, a man from Spain who fought to end his own life legally over a span of 28 years. The film follows his life as he fights both lawyers and his illness, while all the while learning unexpected lessons about the meaning of life and love. “Mar adentro” has fairly heavy vocabulary, but the sophisticated nature of the plot will keep you interested enough to ensure you soak it all up.

“The Car” is the story of the Vélez family and their purchase of their very own bright red Chevy cruiser. Never having owned a car for themselves before, all 5 members of the family take turns adventuring out in the ancient car and enjoying the freedom that four wheels affords them. In the end though, the car means more to them than they ever thought it could. “El carro” is fast and funny – perfect ingredients for a fun language learning experience. Even if you don’t understand every word, the ride is worth your time.

In “The Son of the Bride,” Rafael Belvedere is a down-and-out single father taking care of his young daughter while attempting to keep the family restaurant he inherited from his parents open. It’s a funny, yet moving story about love, family, dreams and growing old. Not only is “El hijo de la novia” a fun, yet moving watch, it’s a great way to jump into the Argentinian dialect and add a bit of South American spice to your Spanish repertoire.